Are we starting to see cracks in the silicon skin of the US? President Barack Obama snapped at what he sees as protectionist policies disguised as privacy concerns being concocted by the European Community.

Speaking to US news site Re/Code about Facebook and Google, Obama admitted that some of the “commercial models that are set up obviously are fairly intrusive” but when the topic turned to Europe addressing these concerns, he rounded on Germany.

“In defence of Google and Facebook, sometimes the European response here is more commercially-driven than anything else. As I’ve said, there are some countries, like Germany given its history with the Stasi, that are very sensitive to these issues,” he said. “But sometimes their vendors – their service providers who, you know, can’t compete with ours – are essentially trying to set up some roadblocks for our companies to operate effectively there.” 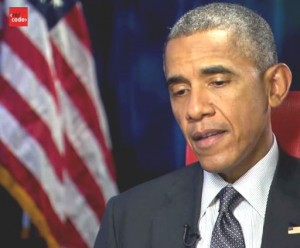 Elsewhere in the interview, the president said he has an overview of both sides of the issues. This actually places him in a difficult situation because he has to play to both galleries. On the one-hand there is the privacy lobby, on the other the need to big-up big business.

“We have owned the internet,” he boasted. “Our companies have created it, expanded it, perfected it in ways that they can’t compete. And oftentimes what is portrayed as high-minded positions on issues sometimes is just designed to carve out some of their commercial interests.”

The assertion that the US owns the market has echoes of Microsoft before the fall. It appears that digital America is becoming aware of the threats outside its borders and has started to cry foul.